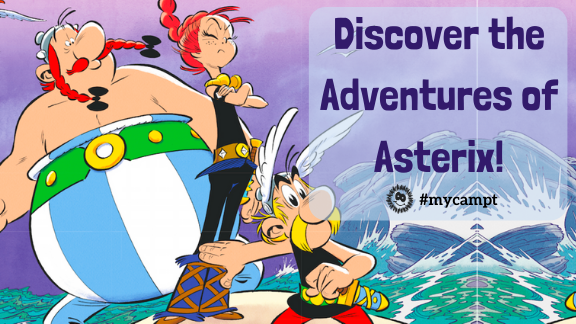 For the first time since 2017 the wildly popular French Astérix comic series have come out with a new edition, Astérix et La Fille de Vercingetorix. Since it’s available right in time for the holidays, it could be a great gift idea for your young bilingual children!

The Astérix comics have been one of the most popular French-language comic books during its 38-volume, nearly sixty year run. The comics follow the adventures and exploits of the title character, Astérix. He’s a short but shrewd Gaulish warrior who resists Julius Caesar’s Roman rule thanks to a magic potion. Astérix is usually accompanied on his adventures by his pal Obélix. The huge and strong sidekick is a fellow Gaulish warrior who doesn’t quite share the smarts of his little partner. Obélix’s little pup Idéfix, or Dogmatix in the English version, is also usually along for the fun-filled ride.

To help you figure out whether Astérix and the gang would be a welcome addition to your child’s bilingual journey, we’ve read and reviewed that newest edition as well as the first volume released nearly 60 years ago. 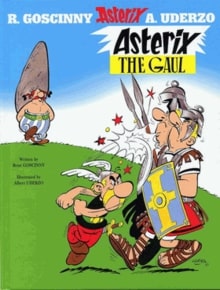 This is a classic ‘David vs. Goliath’ type of story, with Julius Caesar’s Roman legions serving as the ‘Goliath’ and our protagonist Astérix and his fellow Gauls serving as the ‘David’. But Astérix and his fellow ‘Irréductibles Gaulois’ have a trick up their sleeves: a potion that gives them superhuman strength. The leading Roman centurion of the area has a man infiltrate the Gauls’ town and finds out about the potion. Naturally, the Roman must have this potion, so he captures Astérix and the druid who makes the potion, Panoramix. Thanks to the Gaulish pair’s wit, they are able to pull off an amusing series of pranks and tricks that eventually leads to their escape. 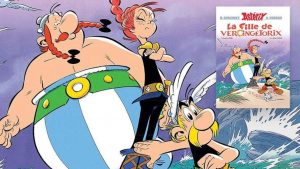 The 2019 edition follows our lovable warriors Astérix, Obélix, and Idéfix as they trying to keep an eye on Adrenalin. She is the rebellious teenage daughter of one of Caesar’s opponents, a Gaulish chieftain named Vercingétorix. That name is a mouthful, but the they’re aware of that fact and have some fun with it several times. The story deals with relevant themes about adolescence including the craving of independence and resentment of authority.

It is also the first ever in the series to feature a strong female protagonist that doesn’t serve as a love interest. Adrenalin is strong-headed, independent, and curious. She finds her own way in this coming-of-age story despite what her parental figures wanted. One small note about the Averni characters who introduce Adrenalin at the beginning: they pronounce all of their ‘s’ sounds as ‘ch’ sounds, which is confusing at first, but only takes a page or two to get used to.

Are Astérix’s Adventures Right For Your Child?

Since Astérix le Gaulois was the first in the series, the affable sidekick Obélix unfortunately doesn’t yet feature as prominently. Though his absence doesn’t have as negative an effect on the comedic quality as you’d expect. While both volumes are chock full of humor, the newest edition starring the female hero Adrenalin touched on some relevant themes that adolescents, and especially young girls (there are zero female characters in Astérix le Gaulois), will surely relate to. The newer editions will certainly offer more relevant underlying themes and representations than those made in the swingin’ ‘60s.

Both volumes also continue the series’ theme of small, fun historical references to the time when the stories take place (50 B.C.). This could be very interesting for any history-minded children. While kids will need at least a moderate level of French reading comprehension to tackle these comics independently, a francophone relative or friend can easily read along and help them through it. Both editions also feature the series’ classic, hilarious, and visually stimulating illustrations, so if your child is a younger French learner, reading it to them will still be a blast for everyone!

Your children can also check out the animated movies at Cine-Cadeau, provided by Télé-Québec! Search through the program schedule and look out for the name ‘Astérix’ to know when to tune in! To get started, there are different volumes showing on Monday night, the 16th, and Tuesday night, the 17th.

You can also click here to check out excerpts or buy the E-book version for all 38 volumes in French!

And check out our list of holiday-themed family-friendly French activities too!

About Alex Murray: A recent graduate of Ryerson’s prestigious RTA Media program, Alex Murray is a passionate young writer with a variety of topic interests. He also spent four years as a camp counsellor for Camp Tournesol and has performed various other duties for the camp as it has grown over the years. A lifelong French immersion student from a French home, he is now a contributing blog writer for the Camp and serves as a Social Media Marketer for the team, among other freelance work. To learn more about Camp Tournesol visit www.campt.ca